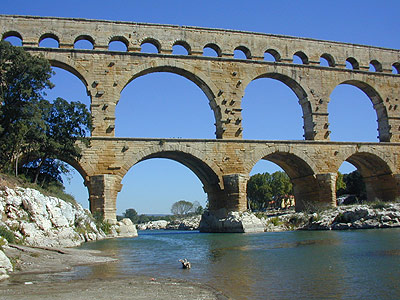 After the pre-historic paintings at Pech Merle, we rode the bus to Cahors to see the Pont Valentré, a fortified bridge built in 1308 to keep the English out of Cahors.

There was a beautiful view downstream from the bridge.

On the other side of the bridge is a steep trail which was once part of the pilgrimage route to Santiago de Compostela.

While walking along the river to the bridge we were surprised by the large crowds of people and the sound of motorcycle engines. It turned out to be the 6th Urban Trial, a world championship for this event. The purpose was to jump motorcycles from one log to another without losing balance or placing a foot on the logs. Trials first took place in hilly and rocky areas which were not as accessible to fans and so now there are also Urban Trials which are closely followed by Europeans.

The next two shots are on a different "course". The competitors here had to jump from a horizontal log to a vertical one.

From there they had to jump to the next vertical log, then to the horizontal log and then reverse the process. Here he is coming back.

In another shot, you can see that there is not much room for error. These were world championship riders in this event.

Here the cyclist is in midjump.

For those not interested in this event, which was new to most of us, there was also an antique market on the other side of the street which tempted some tour members.

On y va to Albi